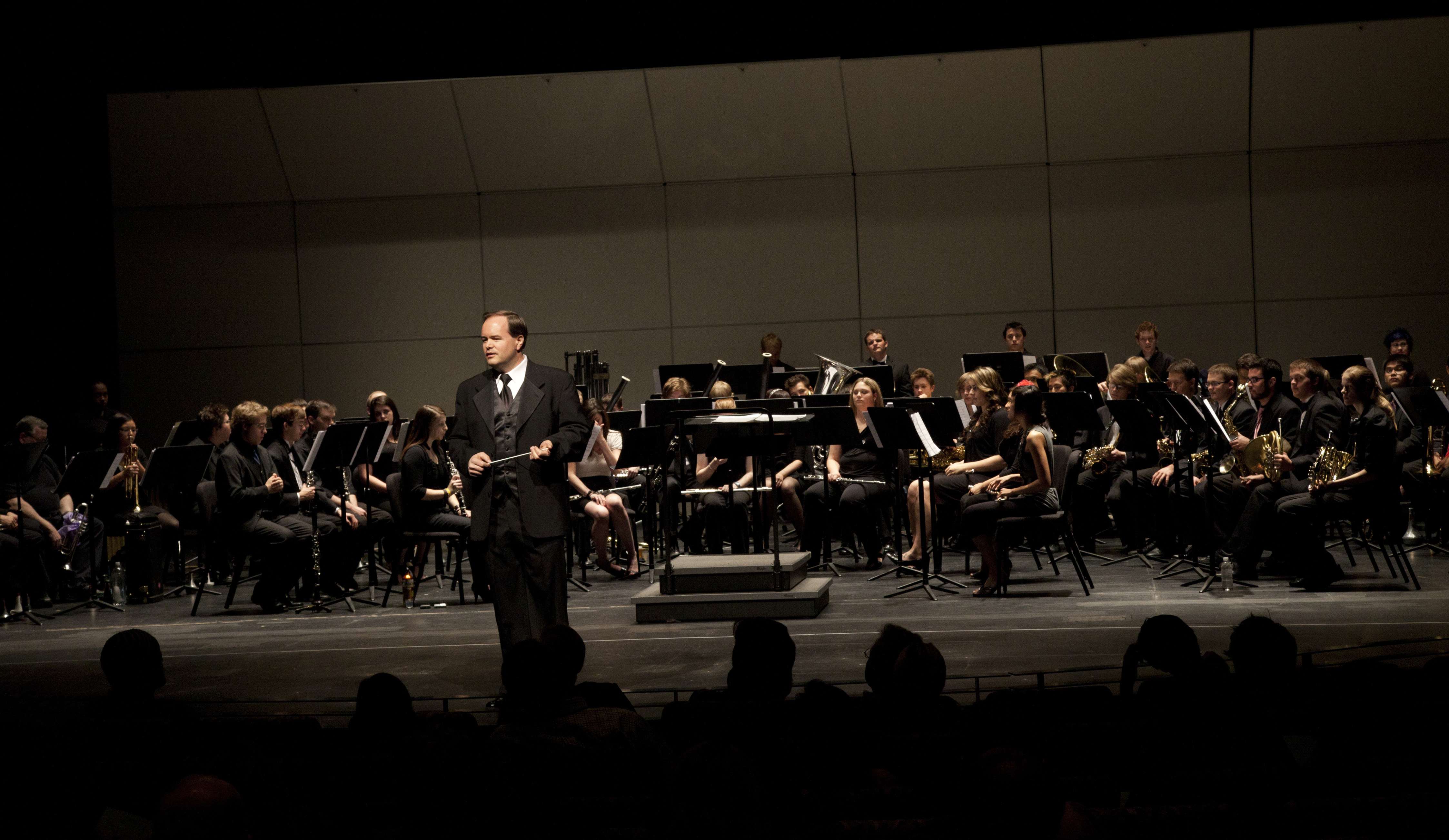 Dr. Robert Hunter is the Director of Instrumental Music at Mesa Community College. Over the past thirteen years he has led the college’s instrumental and music education programs. He also coordinates the Bachelor and Master of Commercial Music degrees with MCC and Ottawa University.

Dr. Hunter is an active adjudicator and clinician. He has guest-conducted, adjudicated, and presented clinics to bands and orchestras in over twenty States and four Canadian Provinces. For seven years he served as co-chair of the committee that completed a new 20MM Performing Arts Center at MCC. Upon completion, he founded a tuition-free summer camp involving nearly 500 junior high and high school music students each year. The camp has now expanded to include high school vocalists and string players.

Dr. Hunter currently serves on the board of United Sound whose mission is to provide musical performance experiences for students with special needs through peer mentorship. He, along with his music education students, recently started a chapter for United Sound at Mesa Community College. For the past five years he has been part of the National Band Association’s technology and marketing team. In the summer months Dr. Hunter collaborates with Alice Cooper’s Solid Rock Foundation and helps provide opportunities for students in the MCC Summer Music Camps.

In 2013, Dr. Hunter was selected by the Arizona Music Educator’s Association as the recipient of the Arizona Excellence in Music Teaching Award. For seven years Dr. Hunter was on the staff of the Macy’s Great American Marching Band at the Macy’s Thanksgiving Day Parade in New York City. For nearly a decade he was the Director of the Phoenix Symphony Guild Symphonic Winds. Dr. Hunter has served as the President for the Arizona Unit of the International Association for Jazz Education and as the Vice President for the Arizona Band and Orchestra Directors Association. Prior to his college appointment he taught high school music as well as serving as the Performing Arts Department Chair of his institution. He was also a director and manager for the Canadian Ambassadors and the Ontario Youth Concert Bands performing concerts across Europe for over ten seasons. Dr. Hunter continues to have an active presence as a performer. His trumpet repertoire and performances span classical, jazz and commercial music.

Dr. Hunter completed his Doctor of Musical Arts degree at Arizona State University. He also holds a Master of Music degree from ASU, as well as a Bachelor of Music and Bachelor of Education degree from the University of Western Ontario, Canada. He also attended the Tanglewood Music Center, the Banff Centre, and the Royal Conservatory of Music. Dr. Hunter strives to mentor and inspire students with his passion and love of music.

Be Part of Music at MCC

Do You Play? Are you a music lover? View the ensembles available CLICK HERE

Visit us here for Information and updates with our SUMMER BAND CAMP CLICK HERE.