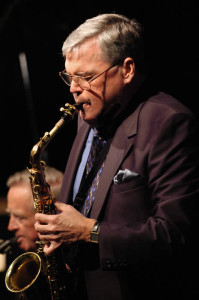 Hugh Lovelady began the study of the saxophone at age eleven in his hometown of Vienna, West Virginia. He was awarded a Bachelor’s Degree in Woodwinds at West Virginia University and a Master’s Degree in Saxophone Performance at Arizona State University.

For 18 years, Hugh Lovelady was a member of the Caesar’s Palace and Hilton house orchestras in Las Vegas, Nevada. He has appeared or recorded with Frank Sinatra, Sammy Davis, Jr., Tony Bennett, Steve Lawrence and Edye Gorme, Lou Rawls, Barbara Streisand, Johnny Carson, Tom Jones, Johnny Mathis, The Carpenters, Dean Martin, and Elvis Presley just to name a few. Hugh regularly appeared in the network Television orchestras for the Dean Martin roasts and Dinah Shore TV shows at the MGM Grand Hotel, the Merv Griffin TV show at Caesar’s Palace and the Mike Douglas TV show at the Las Vegas Hilton and the Jerry Lewis Labor Day Telethon at the Sahara Hotel. Among the network television specials he participated in are: Frank Sinatra presents Marlene Ricci, “Cinderella at the Palace,” “The Mrs. America Pageant,” Liberace and Lola Falana, “A Valentine For You,” Lou Rawls, “Live at the Las Vegas Hilton” and Elvis, “That’s the way it is.” He has also played in the saxophone sections as a lead alto and woodwind player with Si Zentner, Harry James, Buddy Childers and Frank Sinatra, Jr., orchestras. Having moved to Phoenix 15 years ago, his abilities and versatility quickly made him the first call player for anything from a lead alto saxophone in a jazz band to clarinetist in an orchestral situation to a woodwind doubler in Broadway show productions and entertainer acts.

In addition to his playing, Hugh is a residential faculty member at Mesa Community College where he teaches saxophone and chamber music as well as classes in Jazz and Music history and music theory. He is also the musical contractor for Gammage auditorium, Maricopa County Events Center, Chandler Center for the Arts and the saxophone section for the Phoenix Pops symphony orchestra. He is the former director of the Young Sounds of Arizona, an award winning youth jazz orchestra in Phoenix. Their first CD under his leadership, “Ringers” gained national attention in Downbeat magazine. The second CD “Monday Night Dues” has also met with critical acclaim. He resides in Gilbert with wife Jan and their beloved Chow Chows: Riley, Caroline, Emily, Nicholas and Orson.